Eagles struggle to score throughout March 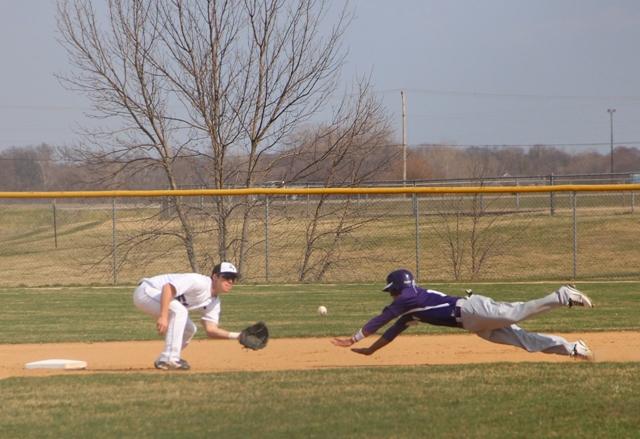 In head coach Eric Pinter’s sophomore season, the Eagles are off to a lackluster start in 2012.

The season started on March 8 with a nine inning game at Joliet that IVCC lost 5-3.

After a storm cancelled IVCC’s rematch with Joliet, the team lost both games of a doubleheader on March 14 at Parkland 5-2 and 2-0.

The first home game of the season on March 16 brought Joliet to Oglesby, where they defeated the Eagles 25-8.

A doubleheader versus Harper on March 17 had IVCC losing both games, 9-2 in the first game and a heartbreaker 8-7 in the second.

The final doubleheader before spring break had IVCC travel to Kankakee. The Eagles were shut out both games, losing 10-0 in the first and getting roughed up 25-0 in the second.

The team took a trip to Arizona during spring break and played seven games out west, recording a win, tie, and five losses.

The team defeated Nebraska Wesleyan College 13-2 in the second game of the trip.

The tie came against Concordia as the teams stalemated at seven runs apiece.

The Eagles returned to start games in the Arrowhead Conference on the road March 31 at Kishwaukee College, losing both games of a doubleheader 2-1 and 4-1.

April began with a home doubleheader against Morraine Valley that the Eagles split, losing the first game 16-6 but winning the second 7-6.

The next game will be on the road versus Madison A.T.C. at 3 p.m. The next conference game is on April 7 at Highland at noon. The Eagles will host Elgin on April 9.

After a disappointing first season at the helm of Eagles’ baseball, former Eagle and now head coach Eric Pinter looks forward to improving and moving towards his ultimate goal of making IVCC respected again on the diamond.

“Back when we played, it was fantastic; we won 3 regional tournaments and set the school record for wins with 52 I believe,” Pinter said. “It’s a little too early to tell [in the second year of his tenure], but we have a good group of kids this year.”

Last season, the Eagles compiled a record of 10-34-1, only winning three games in the Conference, two against Highland Community College and one versus Carl Sandburg College.

Local talent joining the roster this season, includes infielder Matt Serratto, of Flanagan, who said this to say about the upcoming season, “If we just execute what we need to and don’t make mental mistakes, I think we will have a really good season.

One of the returning players this season, Nathan Greene of Ottawa, showed a lot of promise as a rookie last year. He batted .310 with 6 RBIs and scored 23 runs. Greene also led the team with 7 stolen bases.

Other players returning for their sophomore seasons are Tom Doyle and Cody Tyson.