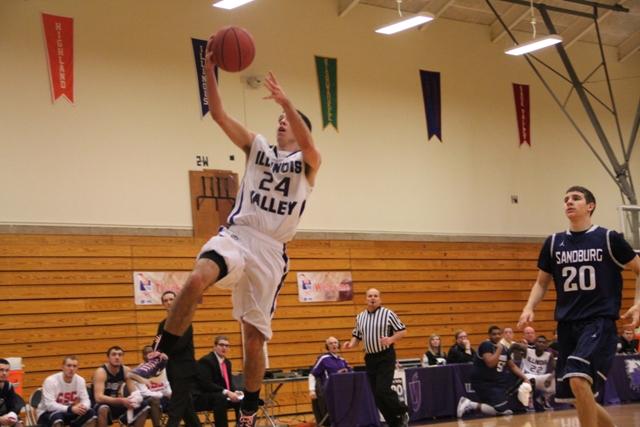 Despite losing one of their best scorers to a concussion, the Eagles found a way to beat the Carl Sandburg Chargers in another tough game Thursday night.

Alec Schwab left the game just before halftime with symptoms of a concussion. His status will be known after more evaluation and tests are conducted.

The Eagles started the game in a daze, seemingly lulled to sleep by the Chargers’ record at 5-15 coming in, but they woke up after halftime in part to a key three-pointer by Brady Johnson to pull the team within one with eight minutes left to play.

Johnson was superb off the bench, scoring 8 points in just under 12 minutes played. Michael Murray led the team with 17 points and Josh Fenoglia added 14.

According to head coach Tommy Canale, “Brady was huge off the bench. He was big on Tuesday [against Black Hawk East] and big again tonight. The last two games, he’s been like the flint that starts the fire. It’s not there yet, but it’s getting there. This team will hit its stride around Feb. 10 or 15. We’re getting close, at the corner but it’s the right-hand turn instead of the curl turn.”

The team’s overall record is now 10-10, with a 3-2 mark in the Arrowhead Conference. Their next game is Tuesday Jan. 31 against Eureka College’s JV team.