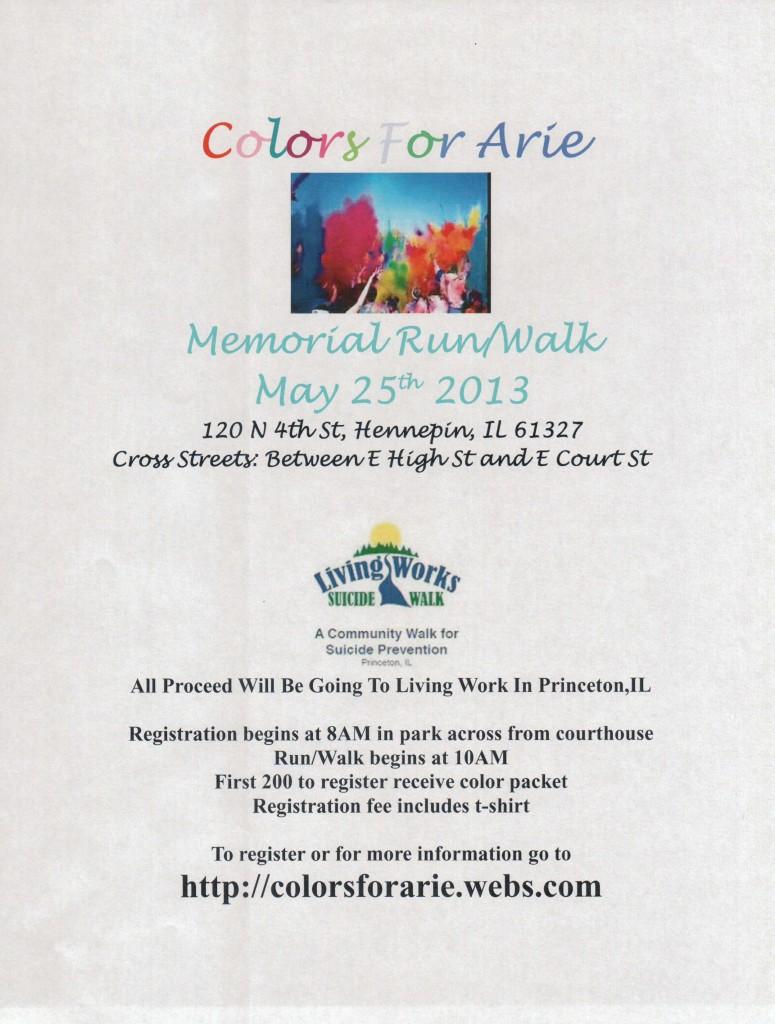 March 3, 2010, I was living in Jackson, Mo.; it was my senior year in high school.
My sister and I were getting ready to leave for school that morning when our Mom got a phone call from our Grandma, Our 15-year-old cousin Arie was gone.
We couldn’t believe it and to add confusion to the heartbreak was the fact that she was gone from suicide. Life for our whole family completely changed that day. Knowing our own pain, we could not begin to comprehend what our cousins were going through.
Arie’s mom, Carol Miller, sought support from Living Works, a support group for families of suicide victims in Princeton. Carol and other family members, along with incredible family friends, have participated in the walk Living Works sponsors in Princeton each June to keep Arie’s voice alive and try to get awareness out and let everyone know that there is help available.
Then, this past year Carol was shown a video of a color run by a friend of hers, and the light started shining bright. She knew this was “ARIE” and a color run would be a wonderful way to keep Arie’s voice loud, show her fun, loving and crazy side and raise even more awareness.
Carol has stated that all funds raised will be donated to Living Works in Princeton,and Carol has become a board member of Living Works.
Suicide is a serious issue that needs to be brought to light. It is so often buried and kept in the dark. The reality of Suicide needs to be put out there loud and bold.
People need to continually realize they are not alone and that there is help available.
Arie was a beautiful, strong intelligent young women at one of the most exciting times of her life. She was a Cadet Firefighter, active in school, a part of a gigantic family and had more friends than you could count. Suicide victims cannot be stereotyped. People need to get informed and let it be known that there is help.  Carol is hoping that this walk for Arie will start to shed that light.
“Colors for Arie” Memorial Run/Walk will be May 25 in Hennepin. This is where Arie lived and also where she is buried. During the walk/run, participants will pass by Arie’s site and will be able to see her beautiful marker.
To register and get more information, go to, http://colorsforarie.webs.com. Facebook users can like the Colors for Arie page; www.facebook.com/ColorsForArie.