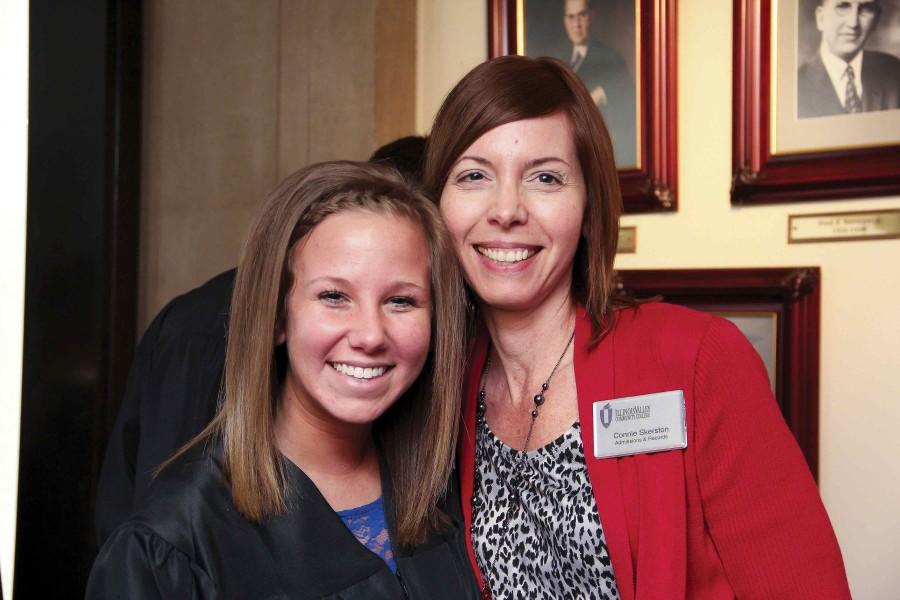 Connie Skerston will be remembered for her smile and for her love for IVCC.

The longtime Admissions department employee died unexpectedly March 5 at the age of 45.

“Although we’ll certainly miss her, it’s so fitting that her last day on campus was spent with her totally immersed in what she always did so very well — facilitating an open house for prospective students and their loved ones, telling them, from the bottom of her heart, about what a great college IVCC is and how proud she was to work here,” IVCC president Jerry Corcoran said in a prepared statement to employees.

Skerston had just been finished speaking with prospective students and was in the area outside of CTC 124-125 when she collapsed, and emergency responders were called. Employees were informed of her death in an email from Mark Gryzbowski, associate vice president for student services, later that night.

Employees have gathered to remember Skerston’s life and her contributions to the college, and they have created a memory book that will be shared with her two surviving daughters, Amber and Lydia.

“Personally, I will remember her smiling face, always-positive attitude and tremendous loyalty for the rest of my life,” Corcoran said.

“Students will most likely remember Connie as the energetic tornado of a person who visited their high school for recruitment visits and for the friendly smile she wore and outgoing personality she exhibited on a daily basis,” he said. “She meant so much to so many of us in the IVCC community and gave so much of herself without asking for anything in return.

“I’ll forever remember Connie as a selfless colleague, a dear friend, and as the welcoming face of IVCC who helped a countless number of students. Which is exactly how she would want to be remembered.”

“There is no way to be able to replace someone like Connie,” Morris said. “She had 16 years of institutional knowledge, boundless enthusiasm, extraordinary attention to detail, and the smile that made everyone feel welcome the moment they walked in the door. I was beyond blessed to have her as a co-worker and as a treasured friend.”

Skerston started at IVCC in November 1998 as a part-time records analyst. In April 2010, she was named the full-time assistant director of Admissions and Records, the position she held at the time of her death.

Skerston was born Oct. 16, 1969, in Spring Valley to LeRoy and Betty (Galiher) Dzierzynski. She was a graduate of St. Bede Academy, IVCC and the University of Missouri-St. Louis.

In Skerston’s obituary, which was written by her daughter, Amber, she noted, “Even her final act on this Earth was one of giving – as an organ and tissue donor who renewed the life and hope for eight different strangers she had never met.”
Skerston is survived by her two daughters, her parents and two brothers.

An IVCC scholarship will be created in Skerston’s name. Donations for the Connie Dziersynski-Skerston Memorial Scholarship Fund are currently being accepted at any Hometown National Bank location.